Two weeks ago in this space I went looking for other churches dedicated to St. Austin, aka St. Augustine of Canterbury. What better place to look for churches dedicated to him than in the country he helped to evangelize, Merry Ole England? And  indeed there are a few churches there claiming him as their heavenly patron, just as we do here in Austin, Texas. 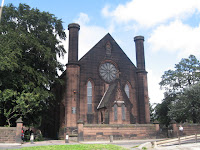 First of all there is St Austin's Roman Catholic Church, 561 Aigburth Road, Grassendale Garston, Liverpool. The church was built in 1838, a mere 70 years before our first church was built, and at the time was described as “a neat and commodious building in the plain Gothic style.” According to their website it is surrounded by mature trees and a cemetery. In a recurring theme it is staffed by a religious community, in this case the Benedictines.
There is another church, Ss. Austin and Gregory Catholic Church in Victoria Road, Margate, Kent, but St. Austin only gets half credit (though he at least has top billing), and I have so far not determined if this is truly Augustine of Canterbury or the other St. Augustine (of Hippo). In any case this parish was founded in 1797, quite a while ago. I was intrigued by the statement on their website about their church: “It may not look much from the exterior but many are  pleasantly surprised by its beautiful interior.” Some would say the same about our church.
There is also a St. Austin’s R.C. Church in Wentworth Terrace, Wakefield. This church “was built in the latter half of the 1820s according to the design of Joseph Ireland, one of the leading architects of the day and is a fine example of his classical Grecian style.”
And finally there is St. Austin’s Church in Stafford, which  appears to be a very active parish. They have five Masses on the weekend (just like us), and one of them is in Polish! The foundation of this parish goes back to the 1760’s, with the present church dedicated on July 16, 1862. Their website [http://www.saintaustins.org.uk/index.asp] includes a virtual tour of the church.
One interesting fact is that all of the St. Austin’s Churches I could find, in the US, Kenya and in England, are all Roman Catholic. I expected to find several Anglican or Church of England St. Austin’s Churches, but did not come across any.
However I did find a St. Austin’s School in Thatto Heath, St. Helens, England. I have no idea where that is, but their website [http://webfronter.com/sthelens/staustinsprimary/index.shtml] has some lovely pictures of English schoolchildren. So there is at least one other St. Austin’s Catholic School besides our own.
And finally, we are not the only St. Austin’s that is proud of its choir. The above mentioned church in Wakefield has a separate webpage for its choir, which with a rather evident lack of modesty declares “One of the best choirs in the area, St Austin's Choir enthralls audiences everywhere they perform with music from the Renaissance to present day.” You can go to the website and listen to several audio clips, and decide for yourself if they are being honest or just bragging. [http://staustinschoir.vpweb.co.uk]
There may be other St. Austin’s churches out there (Australia, New Zealand, who knows?) but these are the ones I found. If you know of others, let me know. I will start collecting them.   But of all of them we know which St. Austin’s is the very best!!!
God bless!