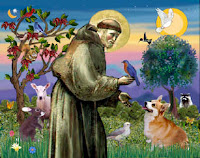 This past Tuesday, October 4, we celebrated the Feast Day of St. Francis of Assisi, the founder of the Franciscan orders and the patron saint of ecology.  Just recently I had the rare privilege of celebrating Mass in the Basilica of St. Francis in Assisi.  Let me tell you how that came about.
On the week of September 17 to 25 I was blessed to go as a chaplain on a tour of Italy.  We went to Rome, Assisi, Florence and Venice.  We were a group of about 16, and we had very pleasant weather the entire trip.  In addition to myself, there was another priest on the group, Fr. Edward Inyanwachi.  He is from Nigeria but has worked for the last several years in the Archdiocese of San Francisco, and I knew him from priests’ meetings when I was stationed in San Francisco, prior to coming here to Austin.
Normally on this tour we had Mass every morning. But on Thursday, because we had to leave Rome so early to go to spend the day in Assisi and then travel on to Florence that evening, we did not have Mass.  So when we arrived around 11:00 a.m. in Assisi, I asked the Franciscan manning the desk in the back of the Basilica of St. Francis when Mass would be, and he told me that there would be Mass at 1:00 p.m. in English.  So I invited our group to join this Mass in English.  As the time drew near, Fr. Edward and I went to the sacristy to see about concelebrating.  But there was no group there. So we vested and started Mass at 1 p.m.   Fr. Edward presided and I preached.  Our group was very happy that we were able to have Mass together in the Basilica of St. Francis.  I feel certain that since Fr. Edward lives and works in the Archdiocese of San Francisco, and I had worked there for eight years, St. Francis was looking out for us and had arranged it all.  It was a great experience. 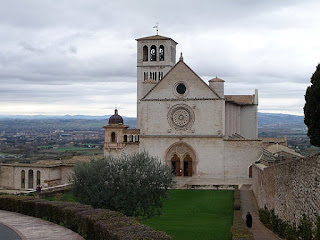 As we finished the group who was supposed to have the Mass showed up, having mistakenly thought it was at 1:30.  So they got their Mass in too.
Assisi is a wonderful place, high on a steep hill, a walled medieval city with narrow, crooked streets.  It is very picturesque.  I was able to walk across the town to the Church of St. Clare, and then back.  In spite of all the tourists, I still found empty streets where I could imagine being back in the 13th century, in the time of St. Francis and St. Clare.  It is a very spiritual place.  The Basilica of St. Francis is not as big or showy as St. Peter’s in Rome, but to me it is more beautiful in its charming medieval simplicity, almost naiveté.
If you ever have the opportunity to go to central Italy, I hope you will remember to stop in Assisi.  You won’t be disappointed.

Email ThisBlogThis!Share to TwitterShare to FacebookShare to Pinterest
Labels: Column